Today I got a nice postcard from the USA! The postcard shows the Gibson Les Paul, one of the most iconic electric guitars in history. Gibson Guitar Corporation is a guitar manufacturer that was founded at the beginning of the 20th century. They innovated by inventing the archtop guitar and producing one of the most popular acoustic guitars during the big band era. Their solidbody electric guitar, the Les Paul, which was designed by Ted McCarty and Les Paul, eventually became one of the bestselling guitars in the world. Thanks Jason! 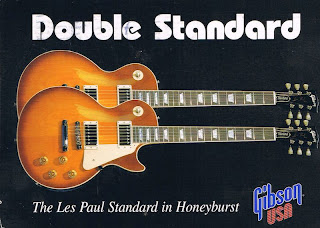 Email ThisBlogThis!Share to TwitterShare to FacebookShare to Pinterest
Labels: United States of America