Today I got a nice postcard from Germany! The postcard shows multiple views of the town of Ratingen. Ratingen is a small town in Mettmann, near the city of Düsseldorf. It was first settled in the 9th century and was subsequently placed under the control of the dukes of Berg. It received its city right in 1276. The postcard is an official Postcrossing card, DE-4121569. Thanks Caroline! 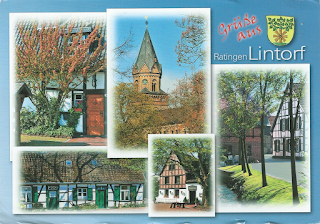