Today I got a nice panoramic postcard from Georgia! The card shows Miracle Park in Batumi, Georgia. The stamp features Nodar David Kumaritashvili, luger from Georgia who fatally crashed on a training run at the Winter Olympics in 2010. Georgia is a country often called the crossroads of Europe and Asia and it is located in the Caucasus region in Eurasia. It has a population of around 4.7 million. The card was sent by Maria from the United Kingdom who was in Georgia. Thanks so much Maria! 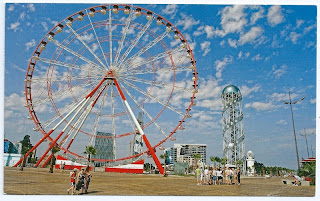