Today I received a card from the Republic of Ireland! Ireland is the third biggest island in Europe and is divided into two parts. The majority of the island is under the Republic of Ireland while the northern part of the island is part of the United Kingdom. Shown here are views of the Cliffs of Moher, which faces the Atlantic Ocean. The area is home to many different species of sea birds and wild flowers. Thanks Yvonne! 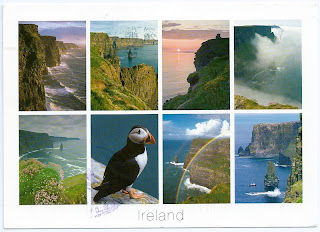